The serial of drama concerning next year’s ESC hosting seems to be far from ending, taking us back in time, in summer of 2016 when Ukraine faced the chance of was losing the hosting of ESC 2018 and that being moved in Germany.

This year’s reports , after Netta’s win in Portugal and Israel gaining the right to host the next edition of the Eurovision Song contest, want the Contest moving in Austria after the statements of state officials about hosting the next ESC in Jerusalem and the uprising threats from countries to boycott next year’s participation. This option was confirmed by the ESC 1999 producer.

These last hours, another episode was added to the whole drama as EBU, through an official letter, warned the Israeli public broadcaster of a possible loss of next year’s ESC hosting , a right that the country founded after Netta’s win in Lisbon. EBU  confirmed all this ongoing rumors and reports referring to the possibility of Israel losing that right to host next year’s contest and see it move to another country.

EBU’s official letter was sent to the Israeli broadcaster (KAN) on June 14,  after the Prime Minister’s decision to separate the news section of the channel from that of entertainment.  It is clear by EBU regulations that no broadcaster can be a member of the EBU if it doesn’t run a news and an entertainment program.

In case the Israeli Supreme court approves of the KAN channel’s split up in a news channel and entertainment channel separately, EBU warns that the broadcaster’s application to become member of EBU will be rejected. This will automatically mean that it won’t have the right to participate in the next Eurovision Song Contest , even more to host the event. 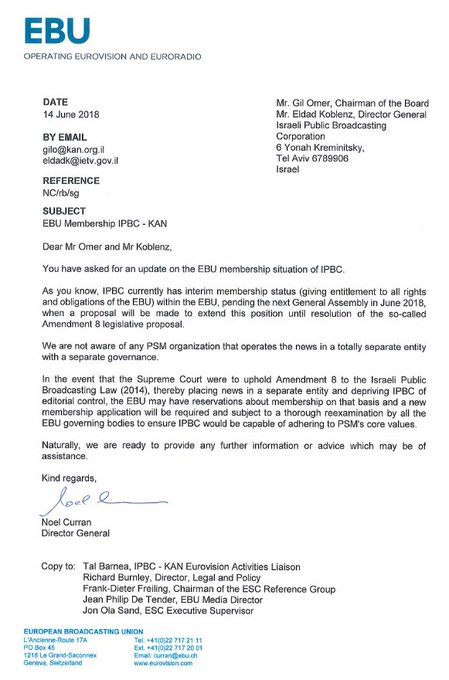 The letter is signed by General director of EBU ,  Noel Curran and leaves no space for misinterpretation:

Prime Minster’s reaction, Benjamin Netanyahu,  was immediate . Prime ministry office statements, aiming to bring down the tension, that ministers and other state officials brought by announcing Jerusalem as the next host city of ESC 2019, without any prior communication with EBU, clear out that the government won’t interfere in the decisions concerning the time and place of the next Eurovision Song Contest, which will be determined by EBU alongside with KAN. Additionally, he called for a meeting with the involved ministers to solve the legal issue concerning the national broadcaster’s structure.

KAN channel is a temporary member of EBU, as it’s organization chart and legal form aren’t determined yet after the closure of the previous national broadcaster. EBU is clearly warning KAN of the consequences a potential split up of its news and entertainment section in different entities.

What do you think? Is this serial of next year’s host going to end soon ? And what will the final outcome be? Stay Tuned on the INFE Network and it’s regional sites to follow all the latest developments on your favorite Song Contest. Eurovision 2019: The map of confirmed participating countries so far « Eurovision 2019: Will it be held in Austria?
EBU: The announcement following today’s meeting with Israel’s KAN »