Italy: The final list of the 24 Sanremo Festival 2019 contestants

The Italian broadcaster RAI, completed during the two nights of Sanremo Giovani the list with the 24 competing acts of Sanremo Festival 2019.

As we already knew the last two night the two shows of Giovani Sanremo festival took place. The winner of each night’s show automatically earned a spot in the Saremo Festival 2019. Apart from the winner RAI revealed in two sets of eleven acts during each show the participants of the upcoming Sanremo Festival next February.

THE NAMES REVEALED ON THE FIRST SANREMO GIOVANI COMPETING SHOW

During the first night of the Sanremo Giovani festival winner was the young act Einar Ortiz, who won the right to compete in the upcoming Sanremo Festival. Besides the winner the Italian broadcaster revealed a set of 11 acts that will compete in Teatro Ariston next February. Among the unveiled acts we meet some of the biggest names of the italian music industry and familiar to the eurovision family. Namely,  Il Volo , who were crowned winners of Sanremo 2015 and achieved a 3rd place in Eurovision with their song  Grande Amor, Nek (Finalist of Sanremo 2015),  Loredana Bertè (Sister of legendary Mia Martini with several past Sanremo participations),  Anna Tatangelo (Sanremo 2011 participant with the entry Bastardo),  Simone Cristicchi (Winner of Sanremo 2007) and Paola Turci ( Several Sanremo participations since the 80’s till nowadays).

The full list of the acts and song titles has as following:

During Sanremo Giovani’s second competing show, RAI  revealed in groups of two or three the rest 12 acts to compete in the upcoming Sanremo Festival. Namely, some of the acts that draw attention are the reunited Federica Carta & Shade, who marked great success with song “Irraggiunibile”and Sanremo 2014 winner,  Arisa , will make a comeback in the popular Italian festival.

Here are the rest 12 acts to compete in Sanremo Festival next February:

Therefore the whole picture of the 24 Sanremo Festival 2019 contestants developed accrding to RAI as following: 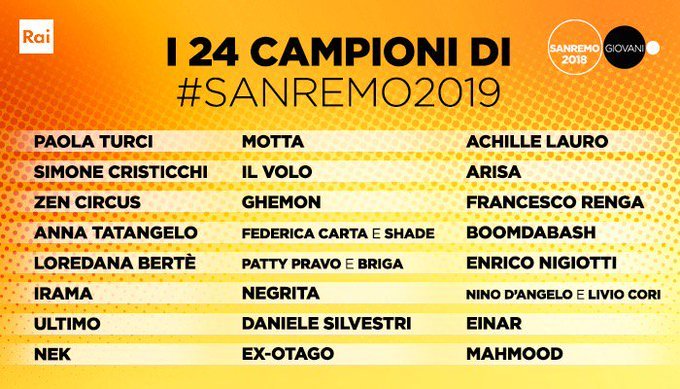 A total of 24 entries will be heard for the first time during Sanremo Festival 1st night on February 5. As usual, RAI will offer to the winner the right to represent Italy in the forthcoming Eurovision Song Contest in Tel Aviv next May. In the last three editions the winner accepted the proposal and represented the country in the Eurovision contest. In 2016 only, Stadio turned down the offer and RAi selected then Francesca Michielin.