Russia: Eurovision 2019 act to be revealed on February 9; Sergey Lazarev confirms being one of the candidates

According to the Channel One tv schedule Russian Eurovision 2019 representative will be revealed on February 9 at 15:30 CET. The initial version of the tv schedule referred to Sergey’s namely but was taken out afterwards. 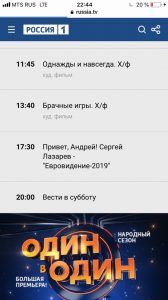 Meanwhile Russia’s Eurovision 2016 representative,  Sergey Lazarev, confirmed through a post on his Instagram account that he is one of the potential Eurovsion acts for Russia. The artist metioned while being one of the candidates VGTRK has still not made its final decision.

It is not yet clear yet who is going (to Israel)! I am only one of the candidates!!

The Russian media had reported in mid January that Sergey Lazarev will be the Eurovision 2019 Russian act for a second time. Further more social media posts from the so called Dream Team established such development as the most possible. Same reports want Philip Kirkorov and Dimitris Kontopoulos being behind Sergey’s Eurovision entry and  Ilias Kokotos on the production. In addition, Fokas Evangelinos seems to be once again the stage director. However this time Sergey’s song will be different than the one in 2016 as this time we will see a dynamic ,epic ballad which has been recorded with a full symphony orchestra

Sergey Lazarev represented Russia at Eurovision 2016 in Stockholm, where he topped the televoting but came 3rd in the overall results. Lets remember his energetic impressive performance in Globen Arena :