The Netherlands: Eurovision In Concert 2020 organisers release an announcement regarding the event’s cancellation [Updated]

With two Eurovision pre party events already cancelled due to the coronavirus outbreak, the organisers of Eurovision in Concert released an annoucement regarding this year’s event in Amsterdam .

The situation in The Netherlands concerning the coronavirus issua is escalating forcing the goverment to adopt more strict measures. Health Minister Bruno Bruins has announced that all measures, which were set until 31st March, have been extended to 6th April. This means that all gatherings over 100 people have been banned.

Under these circumstances  and with this year’s event been scheduled for April 4, the Eurovision In Concert organisers released an announcement confirming the cancellation of this year’s edition of Eurovision in Concert:

A FEW HOURS BEFORE

Just a few hour ago the organisers had published the following announcement which was a first indication that the event was heading to a cancellation:

“On behalf of the government, the ban on events has been extended till april 6th. At the moment we are checking all possible options around Eurovision in Concert. As soon as there will be more information, we will of course report this as soon as possible”

Meanwhile the local OGAE fan club has announced that “Amsterdam Calling” is cancelled :

As a result of the government’s decision to cancel all events until April 6, in order to limit the Corona virus, Amsterdam Calling will unfortunately not be able to continue on April 3. More information about the consequences of this development will follow as soon as possible. 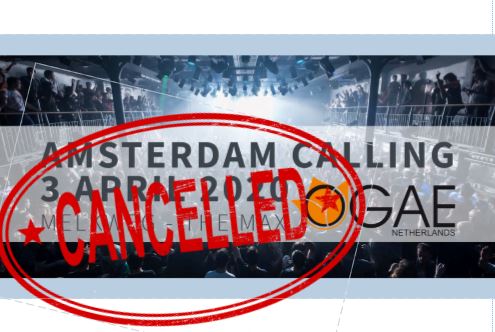 With the Eurovision in Concert close to be cancelled and Madrid Pre party and Israel Calling already cancelled the only pre party that remains is the London Eurovision Party which is set to take place on March 29. However the organiser have already published an announcement that they are looking closely the facts and will soon inform whether the event will be affected by the cornovirus pandemic.