France is the winner of  Junior Eurovision Song Contest 2020 with Valentina and her song “J’Imagine”.

Due to the covid-19 restrictions this year’s Junior Eurovision Song Contest took place in a studio at TVP’s headquarters without the large audiences of the past, the competing entries were pre-recorded and only the interval acts, the hosting and the voting were presented live from Warsaw.

Three hosts were responsible present us this evening’s show. Namely  Małgorzata Tomaszewska, Rafał Brzozowski and Ida Nowakowska-Herndon hosted the show at the TVP studio in Warsaw. A total of 12 countries competed in this year’s contest with Germany making its their debut participation. The acts who had their perfromace pre-recorded appeared in the following running order:

7. Georgia: Sandra Gadelia – “You Are Not Alone”

The show went on with this year’s internal acts . Duncan Laurence, the winner of Eurovision 2019 in Tel Aviv, brought us a little bit of Eurovision on the JESC stage in Warsaw. Duncan Laurence  performed his winning song ‘Arcade’  joined by the last two Junior Eurovision winners Viki Gabor and Roksana Węgiel to perform a new version of his song .

While the online voting was in progress, the stage saw teenage dancers performing in full motion a modern jazz routine, thanking people of all different professions for their daily efforts and making live what this year’s slogan “Move the World” is all about.

Next on stage came Alicja Szemplińska the Polish ESC 2020 representative and performed  her Eurovision entry ‘Empires’ which never reached the Eurovision stage in Rotterdam as the contest was cancelled due to the covid-19 pandemic.

Just before the voting results were announced the custommary common performance of the competing acts took place with the 12 participants performing this year’s Common Song, named after this year’s slogan Move The World.

While the online voting determines the 50% of the overall result, the other 50% is been determined by the national juries, formed by three adults and two children. The juries had the chance to watch all performances in yesterday’s jury final and their votes were announced first in the live show, with the appointed spokespersons announcing the 12 points and the rest ones from 1-10 to follow.

Once the national juries’ votes were unveiled the result saw France top the scoreboard followed by Kazakhstan in second place and Belarus coming third. 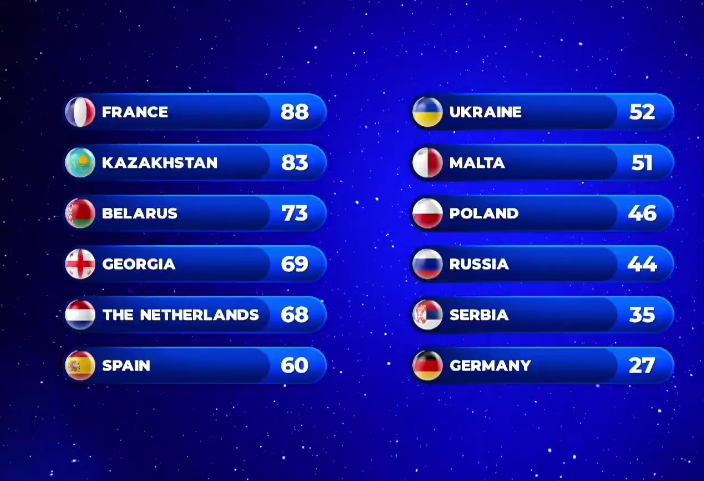 It was then time for the results from the online voting to be added in with more than 4,5 million votes determining the other 50% of the resutls. Once the online votes were counted in the overall score declared Valentina from France as the this year’s winner, leaving in second place Kazakhstan and Spain closing the top 3 places.

Therefore France is the winner of Junior Eurovision 2020 with Valentina and her entry ‘J’imagine’. Congratulations to France and Valenting for their victory!!

Watch below the moment Valentina finds out that she is the winner of this year’s Junior Eurovision 2020: